Why Your Social Security Increase May Be Already Gone 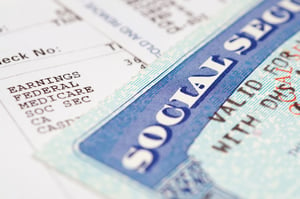 There’s good news and bad news. The good news is that the government recently announced a Social Security increase of 2%, starting in 2018.

That’s the largest increase since 2012. The raise is a cost-of-living adjustment (COLA) based on a consumer-price measure, with the goal of keeping payments in line with inflation. In 2017, Social Security benefits rose only 0.3%, after rising a whopping 0% the year before.

The average Social Security check is around $1,370 a month, meaning next year’s increase will add $27 to the typical payment. About 66.7 million people—roughly 1 in 5 Americans—will receive a boost to their income next year.

To many seniors, this comes as welcome relief. Social Security is the principal source of family income for about half of older Americans, according to AARP.

But, not so fast. The bad news is that for many Social Security recipients, the 2% bump is likely to result in higher premiums for most Medicare beneficiaries. That’s because the COLA is factor in determining the cost of premiums for Medicare Part B, which covers doctor visits and other types of outpatient care for elderly and disabled Americans.

The official premium increase hasn’t been announced yet (last year it was released in November). However, medical costs for Medicare beneficiaries are expected to outpace the Social Security increase, which effectively means a lot of people won’t see much of a boost to their benefits.

Essentially, the Social Security Act prevents Medicare Part B premiums from rising by more than the increase in Social Security payments for those protected by what’s called the hold-harmless provision. That is about 70% of beneficiaries.

If you collect Social Security benefits and your Medicare Part B premium is deducted from those benefits, which is the case for most Medicare beneficiaries, then you may be protected under the hold harmless provision.

Because the COLA has been low for the past two years, Medicare has had to pass its increase in costs to the other 30%. Now, with the larger adjustment in 2018, Medicare can spread its costs across a much larger group of beneficiaries, including those who receive hold-harmless treatment.

Right now, it is projected that those 70% of beneficiaries will see monthly Medicare premiums rise by $25, which consumes nearly all the estimated $27 Social Security increase.

The average retiree spends $4,274 annually on medical costs, not including long-term care, of which insurance premiums make up about two-thirds.

The drain of medical costs on retirement income highlights the need for a comprehensive retirement plan, and the need to periodically revisit your plan as conditions change.