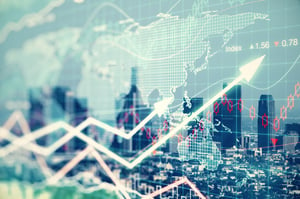 The past few months have been characterized by a rise in geopolitical tensions and ongoing political turmoil. The standoff between the Unites States and North Korea dominated the headlines, while new controversies hampered the Trump administration’s policy agenda.

U.S. economy brushes off the drama

Amidst the international and political drama, domestic economic growth expanded at a 3.0 percent annualized pace, the strongest in two years and closer to long-term expectations. This reflects upturns in private investment and increased spending by businesses, the federal government spending and consumers. However, the devastating hurricanes that hit Texas, Florida and Puerto Rico may curb third-quarter growth, before the eventual rebuild and reinvestment adds to growth in the quarters ahead.

The U.S. labor market reflects this relatively positive business climate with an unemployment rate of 4.3 percent, marking the second lowest in about 50 years. Data suggests that the economic expansion could continue for another couple of years. A key economic indicator suggests a 31 percent recession probability, leaving more than two-thirds chance that the current U.S. expansion becomes the longest on record.

The bull continues to run…but, for how long?

In the capital markets, the continued combination of modest economic growth, healthy corporate earnings and historically low interest rates remained the fuel for a risk-taking mentality among investors. For the quarter, the S&P 500 Index posted a 4.48 percent return, which puts the index at a 14.24 percent return year-to-date. Returns for the Nasdaq Composite Index were 6.07 percent. Many foreign equity markets have also produced above-average results, with emerging market stocks posting some of the highest returns. A lot of these foreign markets benefit from accommodative monetary policies, improving growth prospects and relatively cheaper valuations as compared to domestic equities.

After an eight-year bull market and one of the longest economic expansions on record, investors are beginning to worry about the market’s longevity and the potential timing of the next recession. However, from an economic perspective, many of the traditional “warning” signs still point toward growth over the next year or two. Further, the combination of low unemployment, healthy manufacturing and strong corporate profits point to a low probability of a recession anytime soon.

Yet, from an investment perspective, current market valuations appear elevated relative to historic averages. First, the current price-to-earnings ratio on the S&P 500 Index is more than 30 percent higher than the historical average. Next, dividend yields are near historical lows while earnings levels are near historical highs. Finally, the ratio of corporate equities to Gross Domestic Product (GDP), commonly known as the Buffett Indicator, is the now the second highest on record. Bond valuations aren’t much better. The current yield on the 10-year U.S. Treasury bond stands at around 2.25 percent, suggesting meager annual returns over the next decade. The expected returns in riskier bonds, such as investment-grade and high-yield corporate, are also modest with yields near all-time lows. In short, valuations in domestic stocks and bonds are priced to near perfection with little wiggle room if conditions deteriorate.

Reasons to be optimistic and cautious

Looking ahead, we continue to expect the economy to grow at about 2.5 percent for the next year with modest inflation and a healthy job market. Though the prospects of reduced federal taxes and lighter regulations could push growth higher. Yet, with the Federal Reserve on course to raise interest rates and reduce their balance sheet holdings over the next few quarters, we are concerned about the potential negative impact on the capital markets and the economy. These are unprecedented moves by the Fed, with little historical reference or knowledge of the consequences. Still, the Fed aims to act carefully, with the intention of not disturbing capital markets.

Although markets could continue to surprise on the upside, we don’t feel compelled to add risk at this point. We continue to take a more cautious stance in portfolios with a discerning eye on downside risk. This does not imply we have raised cash or made any major moves in accounts. However, our asset allocation decisions and manager selection is geared toward managing the risk we see in the markets currently.