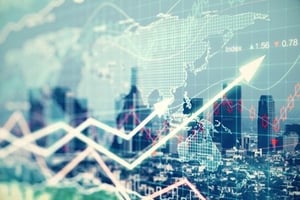 The global economy and financial markets may be entering a new era of change, which could make the next decade look very different from the last. The post-crisis global environment has been characterized by financial repression, because of regulation and dominant central bank policies, weak growth in productivity and real wages, subdued inflation, largely uninhibited trade policies, and low market volatility. At the same time, global debt levels have risen to all-time highs. Over the horizon, we see a potential “shift” in this economic landscape, which could bring significant changes, for better or worse.

The Federal Reserve (Fed) has lifted short-term interest rates seven times since December 2015, including four times in the last twelve months. This is an effort to “normalize” short-term interest rates. Further, the Fed announced plans to shrink its balance sheet by $10 billion a month, starting last October. By the fourth quarter of this year, it will increase that amount to $50 billion per month and continue until the balance sheet returns to a more normal level, whatever that turns out to be.

These actions taken by the Fed have resulted in a quick and pronounced increase in U.S. Treasury yields over the past year. Since last September, the yield has risen about 1.0 percent, which translated into a significant decline in price.

In May, the U.S. posted a $146.8 billion budget deficit, the largest month since 2009. The budget gap rose 66 percent from a year earlier as spending rose almost 11 percent and revenue fell about 10 percent. In addition, the government is facing increasing borrowing needs in the coming years, partly due to tax cuts enacted this year along with the strain on social and health spending from an aging population.

In moderation, a deficit can help stimulate economic growth and increase wealth for individuals and corporations. Concerns arise when the debt-to-GDP ratio exceeds 100 percent, a level we have currently reached. The act of reducing deficits necessitates painful spending cuts or tax hikes, not to mention the political will. For the foreseeable future, it appears that deficit spending is here to stay, which could further push interest rates higher if investors demand more compensation amidst growing debt worries.

3. Traditional trade policies may be reversed

Over the past 25 years, U.S. production and export of goods and services have flourished, while technological innovation and competition from imports have reduced employment in domestic manufacturing industries. In response to some of these issues, the Trump administration withdrew from the Trans-Pacific Partnership (TPP); repeatedly threatened to withdraw from the North American Free Trade Area (NAFTA); stated its strong preference for bilateral trade agreements; and announced tariff increases to protect U.S. producers of steel, aluminum and several other products.

Taken together, those actions threaten a reversal of the trade policies that the United States has pursued for over 80 years. But, Congress, federal and state governments, and corporations have failed to provide adequate support and retraining to the workers and communities adversely affected by the impact of technology and trade. Perhaps then, we should not be surprised by the growing hostility toward the current international trading system.

The domestic economy continues to show strength and sustainability of growth, highlighted by a robust jobs market, solid consumer spending and a rebound in business activity. The latest employment numbers show the lowest initial and continuing jobless claims since 1969, the highest jobs openings rate ever, and the lowest unemployment rate in nearly 20 years.

Not too surprising, the latest read on retail sales showed a significant upside surprise. Retail sales are now running at a 5.9 percent year-over-year pace, close to the fastest pace since 2012, with broad distribution across sectors. Further, growth accelerated in the manufacturing sector during May, with order backlogs rising the most in 14 years.

We expect stable, above-trend growth, balanced inflation risks and gradual removal of central bank accommodations. The latest estimates on second quarter GDP growth shows a very healthy 3-3.5 percent or better pace. Corporate earnings are growing at a rate not seen in many years, and the estimates look bright for the next year or two. In short, a very solid economy should help underpin returns in the equity markets, while higher interest rates and higher trending economic growth may continue to pressure interest rates to the detriment of core bond returns.

At the same time, concerns about trade and geopolitics are likely to remain. Any significant escalation could severely impact global financial markets until there is a resolution.