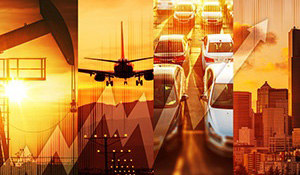 “The four most dangerous words in investing are: ‘this time it’s different.’”

In this volatile and uncertain period for both the capital markets and our economy, it is tempting to conclude that the circumstances and events this time are somehow different from past episodes in history. Yet, the history books tell us otherwise. Certainly, each period has its own set of daunting challenges that were unprecedented at the time. Think of the Great Depression in the 1930s, the social unrest of the 1960s, high inflation in the 1970s, the dot-com bust of the early 2000s and the real estate collapse in 2008.

Today, we are facing the highest inflation in 40 years, aggressive monetary tightening by the Federal Reserve, global supply chain disruptions in the aftermath of a global pandemic, and a war between Russia and Ukraine, just to name a few. Finding solutions to these problems will take time, effort and leadership. Based on the heightened volatility recently in the capital markets, investors appear skeptical of any quick fixes and are bracing for more obstacles along our path. While unnerving, there are still many positive signs in the economy, which could buffer these headwinds and bring about a smoother transition to lower inflation and modest growth.

In the economy, nagging inflation has permeated nearly every aspect of our lives. The most recent reading on the Consumer Price Index (CPI) showed it accelerated 8.6 percent year-over-year, the fastest since 1981. Americans are dealing with a surge in the cost for gas, food and shelter. Gasoline prices were up 4.1 percent last month and about 50 percent over the past year. Meanwhile, food was up 1.2 percent for the latest month and over 10 percent the last 12 months. Shelter prices accelerated the most since 1990, while airline ticket prices were up an astounding 13 percent in one month due to higher fuel prices and a lack of workers. Price increases have been ubiquitous with few signs of slowing.

A recent survey from the NPD Group showed more than eight in 10 consumers are planning to reduce spending in the next three to six months because of higher inflation. Rising interest rates have also dampened mortgage demand, which is now roughly half of what it was a year ago. Correspondingly, homebuilder sentiment has dropped to the lowest level in almost two years as higher prices and rising mortgage rates have quelled buyer demand.

As the economy faces these and other mounting challenges, it is encouraging to see pockets of strength that could provide a ballast until conditions improve. First, the nation’s unemployment rate has fallen to 3.6 percent from 5.8 percent this time last year. Job openings remain at a record high, with many companies are struggling to hire qualified workers. Wages have also increased markedly over the past year. The concern is whether corporate layoffs will tick higher because of weaker economic conditions and moderating corporate earnings.

However, a recent report on manufacturing showed an upside surprise in activity and consumer demand. Production shutdowns in China and the war in Ukraine did not add significantly to supply chain issues and labor shortages have eased a bit. Finally, the services sector, which makes up more than 70 percent of our economy, has grown for 24 consecutive months. Further, 14 of 17 sectors reported growth recently, with improvements in supplier delivery times, a reduction in prices paid and higher new orders. While consumers are struggling with higher prices, end-user demand remains relatively strong.

To try to combat high inflation, the Federal Reserve has embarked on an aggressive tightening campaign. Recall, the Federal Reserve has a dual mandate to keep prices stable and unemployment low. While the job market is quite strong, high inflation has pushed prices up for nearly everything we buy. Already, the Fed has announced a 1.5 percent increase in short-term interest rates with another 1-1.5 percent expected by the end of the year. Further, they have started to sell U.S. Treasury and mortgage-backed securities from their balance sheet. They outlined expectations to sell $30 million of Treasury and $17 million of mortgage-backed securities in the first three months, starting in June. They will double these amounts over the proceeding months to drain liquidity from the economy and, hopefully, bring down inflation.

As these events unfolded, the capital markets responded violently and quickly to the downside. Through the first six months of 2022, both the S&P 500 Index, which is a broad representation of stocks, and the Bloomberg Aggregate Bond Index, which is a broad representation of bonds, are down double-digits. The S&P 500 is down nearly 20 percent, while the Bloomberg Aggregate Bond Index is down by more than 10 percent. Typically, bonds hold up relatively well when stocks decline. To witness such a steep decline in both at the same time is a very rare occurrence. In fact, the first half of the year will go down as one of the worst periods on record for stocks and bonds. Most of these declines are a direct result of much higher interest rates and a revaluation of risk by investors.

Looking ahead, after severe volatility during the first half of the year, the future direction of the economy and capital markets will hinge on whether the aggressive action by the Federal Reserve will eventually bring down inflation, without causing a severe recession. However, strength in the job market, manufacturing and services sectors will help buoy conditions amidst the uncertainty. After a terrible six months for bonds, we expect better returns in the second half of the year as interest rates should moderate. Stock volatility will likely continue, but a relief rally is highly likely as investors assess the Federal Reserve’s actions and the growth of corporate earnings becomes clearer. We will continue to analyze the data and make moves in client accounts as appropriate.

As always, investing in capital markets comes with some risk and uncertainty. We thank you for your continued support of our investment process as we work hard to deliver positive risk-adjusted portfolio returns to our clients. Should you have any questions, please do not hesitate to reach out to your financial adviser.