The Role of Politics in Your Finances 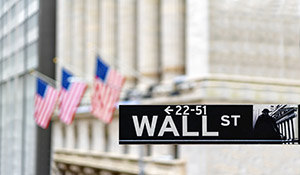 As you know, government policies can affect our lives in many ways. So, when a new administration is elected or a major piece of legislation is announced, it’s reasonable to wonder what it means for your finances.

Unfortunately, it is hard to find answers when both political parties are in deep disagreement. The news cycle becomes saturated with a lot of misinformation and hyperbole, making it difficult to separate fact from fiction.

The reality is that politics often has less of an influence on the economy and capital markets than we are led – often during an election year – to believe. When it comes to politics and your money, it’s important to step back and consider an objective point of view.

Here are three things to keep in mind:

1. We are always monitoring the situation

Above all, Advance Capital takes a long-term approach to financial planning and investing based on your specific financial needs and goals.

To that end, as policy plans and proposals change, we review each to learn how they may affect a client's personal situation. If there is a change in legislation that provides an opportunity or risk to your financial picture, we will actively work with you to determine whether adjustments are needed to your financial plans, tax and estate plans, or investment portfolios.

2. The economy and stock market care about more than just politics

Taxes, government spending and regulation can shape economic growth and market performance. But there are many more factors in play, including interest rates, technological innovation, investor behavior, and basic supply and demand.

Contrary to popular belief, the stock market doesn’t seem to care if a Republican or Democrat controls the White House. Stocks have generally gone up no matter which party held the presidency. 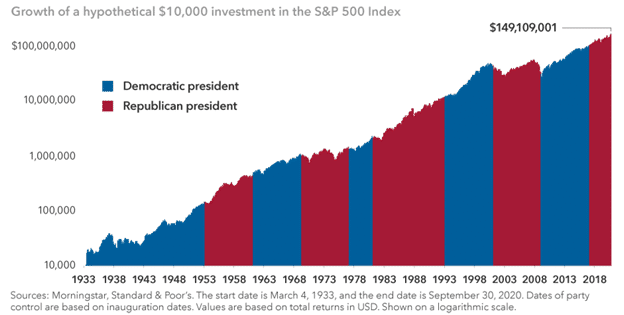 A hypothetical $10,000 investment would have grown under each administration since 1930s.

It is important not to let your investment decisions become influenced by factoids, items of unreliable information that are reported and repeated so often that it becomes accepted as fact.

Case in point: the belief that Democratic preferences for regulation and taxation will result in lower market returns. In fact, when Democrats have controlled the White House, House and Senate, the market produced above-average returns during these years.

Of course, the past does not predict the future. The point is the economy and stock market do not always react to political events in the same way we as individuals do.

It is also important to keep in mind the party in power can never rule by decree. Despite some of its flaws, the American governing system is run by checks and balances.

3. Sitting out the market is usually a losing strategy

Given the stock market has tended to rise no matter who occupies the White House, it is rarely a winning strategy to try to time the market or sit on the sidelines.

Consider the example below depicting the performance of three hypothetical investment portfolios of $10,000 over the last 22 election cycles, assuming a four-year holding period. One investor fully invests at the start of the year; another takes a dollar-cost averaging approach and invests in equal amounts over the first 10 months; and the last waits to invest at the start of the year after the election.

In other words, the decisions that will have the gravest impact on your finances won’t come from a president or political party, they will come from you.