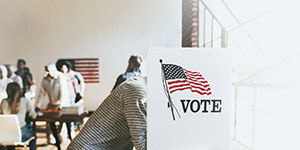 We all know 2020 has been anything but normal. In a time of a global pandemic, economic recession, social unrest and high political partisanship, this year’s presidential election is unlikely to follow any type of script either. On top of what it may mean for the country’s future, you are probably wondering what it could mean for your portfolio and financial goals.

“This time is different” is a dangerous phrase with which investors can make costly mistakes by straying from the fundamental principles of investing – buy low, sell high; stay the course; diversify your investments; etc. It is a phrase that can convince someone to buy risky stocks or pull out of the stock market entirely.

Even investors who have invested through contentious elections before without blinking an eye may think differently this time. But consider the country and its economy has previously experienced periods of civil unrest, war, recession and, yes, deadly pandemic. And, it has always pulled through. So, should you really worry that this time will be any different?

As the presidential election draws near, you can expect the spread of misinformation and baseless predictions on how the result will impact the economy and stock market. Therefore, it is a good time to take a step back and arm yourself with an objective point of view. Instead of looking at projections, it helps to look at the historical record.

The investment fund company Capital Group recently released two reports on the market during past presidential elections, “drawing insights from [an] analysis of over 85 years of investment data across 22 election cycles.”

Here are three of their most important findings that will give you some perspective on the 2020 presidential election.

Party of the winner does not matter

Contrary to popular belief, the stock market doesn’t seem to care if a Republican or Democrat wins the White House. Stocks have generally gone up no matter which party held the presidency.

Imagine investing $1,000 in the S&P 500 as Franklin D. Roosevelt first took office. Today, your investment would be worth over $14 million. Sure, this is an unrealistic scenario, but it is proof of the market’s resiliency.

There have been an equal number of Democratic and Republican presidents during this timeframe. It goes to show you that elections haven’t made much of a difference in the direction of long-term investment returns. What matters most is staying invested for the long term.

Although elections don’t significantly affect the market over the long term, they can in the short term. Markets tend to have lower returns and higher volatility early on in election years, generally due to the uncertainty surrounding each election. But the volatility doesn’t last, and in fact market returns often rise higher than normal after the primaries.

From Capital Group: “Since 1932, stocks have gained an average of 10.2% in the 12 months following the conclusion of the primaries (using May 31 as a proxy) compared to just 5.8% in similar periods of non-election years.”

Investors who weather the volatility and stay put are often rewarded, meaning you can feel confident in the fact the market typically returns to a normal upward trajectory, even during rocky election years.

Sitting out is usually a losing strategy

Given the increased volatility yet upward trend no matter who wins, it is rarely a winning strategy to try to time the market or sit on the sidelines.

As a clear-eyed example, Capital Group analyzed the performance of three hypothetical investment portfolios of $10,000 over the last 22 election cycles, assuming a four-year holding period. One investor fully invests at the start of the year; another takes a dollar-cost averaging approach and invests in equal amounts over the first 10 months; and the last waits to invest at the start of the year after the election.

As in any given year, the best investment move you can make often is to stick with a long-term investment strategy based on your specific financial needs and goals – not national politics. When it comes to your investment portfolio, it is better to ignore the temporary noise and focus on the long term.

The Capital Group election guides are well worth reading in detail, giving you more perspective on elections and the market, and the importance of thinking long term. You can download them for free from the Advance Capital Education Center.