Market Downturns Don’t Have to Derail Your Retirement 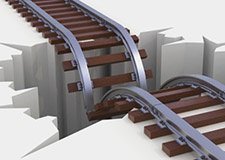 Last week marked the seven-year anniversary of the current bull market – the third longest in history. The milestone can serve as a reminder that, even in retirement, time is on the side of most investors during a market downturn.

Investors who are in or nearing retirement can be especially vulnerable to market losses. A generally shorter time horizon and portfolio withdrawals make it harder to recover. Still, a market downturn in retirement may not be as harmful as you think.

How long do you need to reasonably wait for a potential market recovery? History shows that market recoveries tend to occur in only a few years.

Consider past market downturns and recoveries dating back to 1926. On average, when the stock market declines by 10% or more, the time span from when the downturn begins to when the market fully recovers is about 38 months, or just 3.1 years. 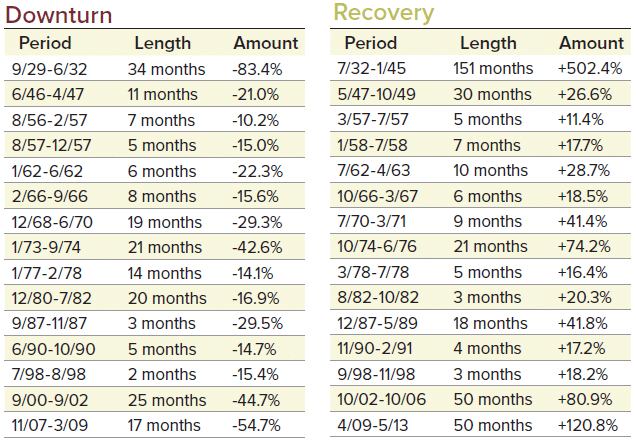 Note: This is for illustrative purposes only and not indicative of any investment. The data assumes reinvestment of all income and does not account for taxes or transaction costs. Return amounts shown above are cumulative compounded returns for the corresponding time periods. An investment cannot be made directly in an index. Past performance is no guarantee of future results.

Source: Large Company Stocks—Standard & Poor’s 500® Index, which is an unmanaged group of securities and considered to be representative of the stock market in general. Downturns in this example are defined by a time period then the stock market value declined by 10% or more from its peak, while the recovery period indicates the number of months from the trough of the downturn to the market’s previous peak.

Retirees in their 80s and early 90s can even expect to live longer than that, according to the Social Security Administration period life table.

Market downturns are relatively common. Chances are you’ll see a market drop of 10% or more during your retirement. Of course, market downturns come in all shapes and sizes, or lengths and severities.

In contrast, the shortest market downturn occurred over 2 months, dropping 15.4% from July through August 1998. It was back to its original peak only 3 months later.

A better example for current and future retirees may be the last significant market downturn during the 2008 financial crisis. The market lost 54.7% over 17 months, from November 2007 to March 2009.

Of course, knowing that a market downturn won’t last forever may not give you the confidence to stay invested when it happens. But, it can help to consider how better off you’ll likely be if you do.

Let’s take a look at two hypothetical investors in retirement over the course of the most recent recession. Both Retiree A and Retiree B invest $500,000 in a diversified portfolio (holding both stocks and bonds) on January 1, 2007. They immediately begin a monthly distribution from their accounts at a 5% annual rate. The initial monthly withdrawal is $2,083.33 per month. Each subsequent year, they increase their withdrawal amount by 2.5% to account for inflation.

Retiree A decides to stay invested in his portfolio during market highs and lows.

Here’s how their investment decisions compare:

* Cumulative withdrawals from 1/1/07 - 6/30/2015: $233,633. The information presented is for illustrative purposes only, and is not indicative of any investment, nor should it be construed as investment advice. Individual results may vary. Past performance is no guarantee of future results. Investing involves risks that investors should be prepared to bear. Investments may lose money and are not guaranteed or insured in any way.

While both investors saw their portfolios shrink due to the monthly withdrawals, Retiree A’s portfolio retained a higher balance beginning in 2009. By mid-2015, Retiree A would have had $71,929 more for retirement than Retiree B.

The key takeaway is that the market doesn’t ring a bell when it reaches its peak or its bottom. The prudent thing is to hang on and stay the course, even during a market downturn in retirement.

A way to give yourself some additional protection is to build up a cash fund worth at least three years of expenses that you can tap specifically during times of market turmoil.

Whether you’re in retirement or just starting your career, a market downturn can always create enough discomfort to tempt you to cash out. But, if history teaches us anything, it’s that you likely won’t have to wait long to get through it and you’ll be happier that you do.