Transformative Power of ‘Framing’ on Your Money – and Life 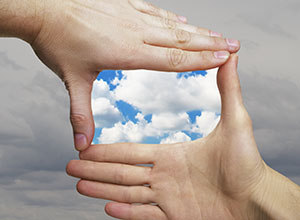 The happiness we feel about our money, work, relationships, life in general, isn’t derived by only what happens, but also how we perceive what happens.

One of the most famous sayings of Roman emperor and Stoic philosopher Marcus Aurelius goes like this:

What he seems to be articulating is a cognitive bias named more than 1,500 years later as the framing effect.

The framing effect is the psychological principle that our decisions are influenced by how choices are positively or negatively presented. It is related to the groundbreaking research of Amos Tversky and Daniel Kahneman known as prospect theory, which states the pain of a loss is twice as powerful as the pleasure of a gain. When given the choice, people prefer a sure gain over a probable one, and prefer a probable loss over a definite loss.

When presented with a positive frame, people tend to avoid risks. But when presented with a negative frame, people tend to seek risks. As a simplification of one role-playing experiment involving a life-or-death scenario shows, people will avoid letting 10 out of 100 lives perish but will take the opportunity to save 90 out of 100 lives, even though each option results in the same outcome.

You can see the concept of framing at work at your local grocery store. For example, beef advertised as 95% lean versus 5% fat. Or more misleading, food products packaged as gluten free although they don’t naturally contain gluten (gluten-free candy, anyone?) just to make them appear healthy.

Framing is considered one of the strongest cognitive biases that impact the decision-making process. It can influence everything from our political and social attitudes – what we call spin – to how we spend money and even what type of health insurance we choose.

While all of this may sound alarming, there is a major silver lining. We are not relegated to being only involuntary victims to framing. Instead, we also have the ability to use it as a tool to make better decisions and become happier people.

One of the most enlightening investment charts out there is from JP Morgan showing the S&P 500’s annual low points and ending year returns over the past 39 years. It certainly comes in handy during wild stock market swings. 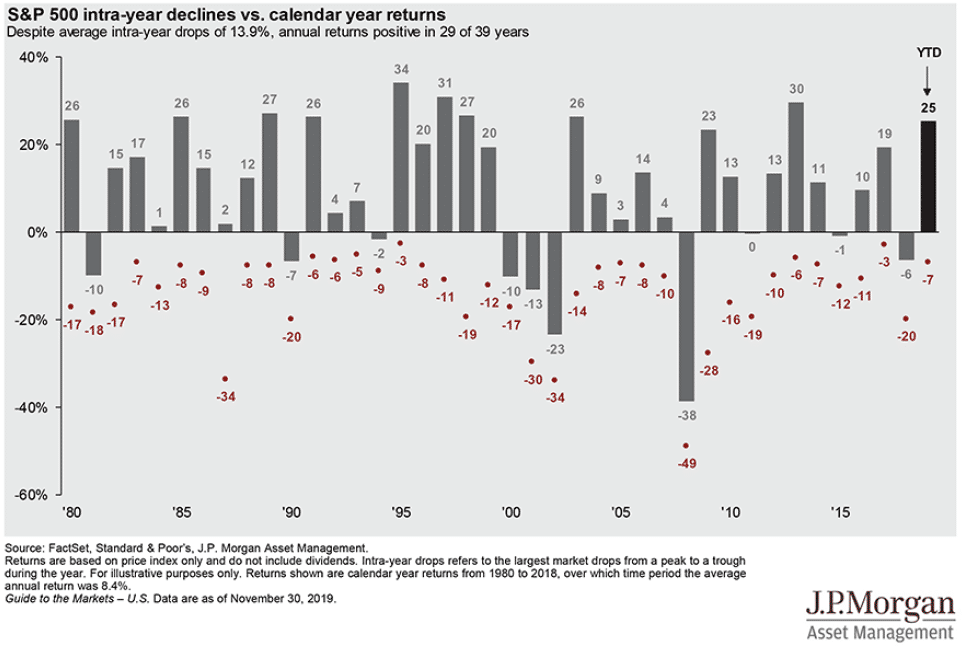 The average market decline has been 13.9% since 1980. Yet annual returns have been positive in all but 10 years, or 74% of the time. Of course, the past is no guarantee of the future. But it goes to show you there are two ways of looking at a market drop: as something to worry about, or as a typical decline in another typical year that will likely end in the black.

By framing things in the right way, you can make smarter choices with your money that lead to better outcomes. It can help you avoid rash decisions, such as impulse buying and making emotional investment changes.

It can make you more content with what you have (what I have now is what I once wanted) and more dedicated to saving (to spend this money is to live a life I may not want, but to save is to eventually live the life I do want).

There are a variety of ways to frame situations that are conducive to your financial goals. We’re not missing our friends destination wedding, we’re choosing to stay committed to our financial goals. There is a great sale, but it’s still spending money I don’t need to spend.

But there is much more. Framing can also help you find greater peace of mind and happiness – every day.

Research indicates that people become happier with age, greatly because they start to perceive the world in a more positive and impartial light.

The journalist John Leland came to that conclusion while spending a year interviewing and interacting with six New York City residents who were ages 85 and older. He documented his experience in the book, Happiness Is a Choice You Make.

Leland writes, “older people are more content, less anxious or fearful, less afraid of death, more likely to see the good side of things and accept the bad, than young adults.”

A day spent at the doctor’s office for a bad hip was still the gift of another day of being alive. A new complicated device meant spending quality time with the grandkids as they teach you how to use it. For older adults “problems were only problems if you thought about them that way. Otherwise they were life — and yours for the living.”

We all have ability to frame situations differently, in a way that leads to better decisions and better outcomes. It can alter our perceptions, changing the way we see ourselves and the way see others.

What do you think if you see someone’s unmade bed? Laziness? Sloppiness?

Now, what if we frame it in a more compassionate way. Perhaps, it is just the habit of someone who is too consumed with work outside the home to be able to give much time to this one detail. Remember, Steve Jobs didn’t wear the same black turtleneck and jeans because he wanted to make a fashion statement. He wore the same clothes so he had one less time-consuming decision to make in a busy life of making monumental decisions.

Give it a try.

Plan a day to actively reframe things around you. And, whenever something bad happens, pause and ask yourself how you can turn it into a positive.

Then keep reminding yourself. You can work your mind like a muscle until you find yourself more receptive to what is and less upset over what you wish was. It’s when you do that, when what you want most – a happy, fulfilling life – happens.

You don’t always get to decide what happens in life, but you do always get to decide how you will react. Which ultimately determines how events shape you. This brings to mind the oft-cited 2005 Kenyon College commencement speech by writer David Foster Wallace about the value of education in making concerted choices to see the world truthfully and not in a mindless, unfulfilling default mode.

He starts with a story:

Many of us go through life asking the same question, he says. We make choices based on our set perceptions without trying to see for what they truly are.

The only thing that’s capital-T True is that you get to decide how you’re gonna try to see it.

But reframing doesn’t come naturally. So, he ends with a proclamation that it is a continuous process, that it will take an:

…awareness of what is so real and essential, so hidden in plain sight all around us, all the time, that we have to keep reminding ourselves over and over: