Why Tapping Your Retirement Accounts Early Is a BAD Idea

In the past year, a record number of Americans have put in their resignation letters. They have left to find better jobs, start their own businesses, simply take a break, or retire. All can be good reasons to quit, unless it means tapping your retirement accounts early.

The funds in a tax-deferred retirement account, such as a 401(k) or traditional IRA, are yours. But you can’t simply withdraw them like in a checking or savings account. At least, not until you reach age 59 ½.

If you take money out of one of those retirement accounts before age 59 ½, the IRS may hit you with a 10% tax penalty. And that is on top of the income taxes due on the amount withdrawn.

One exception is the Rule of 55. Basically, if you retire or are laid off in the calendar year you turn age 55 or later, you can withdraw funds from your current employer’s plan without paying the early withdrawal penalty. However, penalty-free early withdrawals are limited to funds held in your most recent company’s retirement plan.

You Could Lose Thousands in Potential Growth

Before jumping ship and cashing out your retirement account, it is important to also consider the long-term consequences. There is potentially a major opportunity cost that could reach up to thousands of dollars in missed growth.

That is without adding any additional contributions, which shows the power of compounding.

By making an early withdrawal, it is highly unlikely you’ll be able to recover those lost years of compound interest. Ultimately, that is a retirement risk. It’s impossible to know how long you’ll live in retirement, so every bit of savings and growth matters.

Loans Are a Bad Idea, Too

What if, instead of withdrawing money, you take out a loan? This is more common for those using their 401(k)s or other retirement accounts to buy a home. Since you are borrowing from your own money, a 401(k) loan may feel different from a typical bank loan. But it shouldn’t.

In other words, tapping your retirement accounts for reasons other than a well-planned retirement is often a bad mistake. Sure, life happens. New opportunities materialize. But it shouldn’t come at the expense of all the good things that could happen in the future.

What else should you be prepared for in retirement? Download this free ebook to learn what steps can help you transition into retirement with greater confidence: Your Money in Your 50s: A Retirement Planning Guide for Procrastinators and Avid Savers 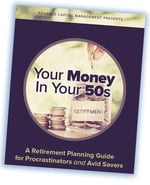