Should You Expect a Recession or More Economic Growth? Yes. 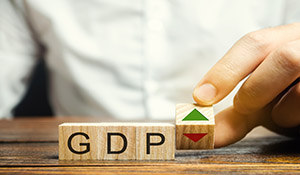 Let’s be honest: bonds are boring. Their relatively consistent and modest returns lack the daily excitement of erratic stock prices. So, when bonds do make headlines, it may be time to pay attention.

That's because the yield curve, an indicator commonly thought of as a barometer for economic growth, has flashed warning signals. The yield curve is a graph of bond yields — typically, yields on Treasurys issued by the U.S. government — plotted against their maturity, which usually slopes upward. When that slope flips, it often indicates that a recession is likely during the next year or two.

However, it’s not a flawless forecast. It shouldn’t then be a cause for immediate concern. Still, it’s a good reminder to check your portfolio and make sure it’s as recession-proof as possible.

Bonds are debt obligations issued by a company or government. When you purchase a bond, you’re essentially lending your money – and typically, the longer you’re willing to lend your money for, the higher you’ll be compensated for lending that money. Because of this, when the yield curve is “normal,” a bond with a longer time until maturity, like a 30-year bond, will offer a higher interest rate than one with a shorter maturity date, like a 10-year bond.

But when long-term yields fall below short-term yields, the yield curve inverts. That inversion tends to reflect investors’ uncertainty about the future of the economy.

At the end of March, the 2-year U.S. Treasury yield was trading higher than the 10-year yield for the first time since 2019, marking what’s called a “yield inversion.” According to market research, the last six times the curve inverted like this, a recession followed 18 months later on average.

Still, a yield curve inversion does not mean a recession is imminent. Of the last 10 inversions, there were three times that there was no recession for the next two years. Plus, the timing is widely uncertain. On average, recessions started 21 months after an inversion, but they ranged from nine to 34 months.

Currently, the Federal Reserve is trying to bring down inflation by raising interest rates. This generally reduces demand for goods and services and cools the economy. If it goes too far, the economy could fall into a recession. But the Federal Reserve could always change course if high prices start to come down.

If we do enter a recession, the fact is that recessions are a normal part of the economic cycle.

The National Bureau of Economic Research (NBER) defines a recession as “a significant decline in economic activity spread across the economy, lasting more than a few months.” It is commonly declared when Gross Domestic Product (GDP) shrinks for two consecutive quarters (six months), businesses cease to expand, the rate of unemployment rises and housing prices decline.

There have been 13 recessions since 1945, including the brief economic shutdown in 2020 from the COVID pandemic. That means a recession has occurred at least once every 10 years.

What is most important to note is that recessions don’t last long – only around 10 months on average. By the time we know a recession is here, we’ve already been in one for six months, so it is likely already halfway over. In other words, it rarely makes sense to try to make changes to your portfolio or financial plan in hopes of timing a recession.

How does a recession impact the market?

Conventional wisdom says a recession invariably means a severe market downturn. The stock market, however, is not the economy. Even though it is said the stock market is the collective view of the economy’s future, they are not perfectly correlated. Especially, when it comes to recessions. Whether the market drops significantly, like in 2008, depends on the causes and severity of the recession.

The chart above illustrates the cycles of the stock market, as represented by the S&P 500, dating back to 1927. The gray bars indicate every recession along the way. As you can see, recessions have occurred at all phases of the market cycle, during market expansions and downturns, and during the beginning, middle and end of each type of cycle.

What we can learn from this is that a market downturn is not a sign of an impending recession, nor does a recession mean a stock market decline. With that said, predicting a recession and its impact on the stock market is nearly impossible.

What does this mean for your portfolio?

The key to investing before, during or after a recession is essentially the same: keep a long-term perspective and focus on the big picture. Instead of trying to time your way in and out of various parts of the market or individual investments, you build a portfolio that will carry you for the long haul.

Aggressive market-timing moves, such as shifting your portfolio to cash, can backfire. Some of the biggest gains can happen at the tail end of an economic cycle or immediately after a market bottom. It’s often better to stay invested to avoid missing out on the gains from the recovery.

Here are some portfolio moves that can help carry you through economic good times and bad.

Some sectors of the stock market, such as consumer staples and companies with long histories, have traditionally been safe bets during economic downturns. However, it is dangerous to load up on one particular sector. Should a recession coincide with a market downturn, it is difficult to know what investments will be most affected.

This is why diversification – owning investments across a variety of asset classes – is a long-term investment strategy that is especially useful during a recession. It eliminates the guesswork and helps reduce risk, as the winners make up for the losers.

An asset allocation aligned with your goals

We know that stocks typically perform poorly during recessions. Yet, trying to time the market by selling stocks often does more harm than good. Does that mean investors should do absolutely nothing? Of course not.

You can prepare for a recession by reviewing your overall asset allocation, which may have changed significantly during the bull market, to ensure that your portfolio is balanced, broadly diversified and, most importantly, aligned with your specific long-term financial goals.

What asset allocation is right for you depends on personal factors, including your objectives, age, savings and income, current assets and attitudes toward risk. A balanced portfolio of highly changeable investments like stocks with relatively steady investments like bonds generally makes for a smoother, consistent ride. The objective is to have enough risk in your portfolio to generate the growth you need to achieve your goals, but not enough risk to suffer deep losses or to tempt you into ill-timed changes when the market fluctuates.

As you prepare to retire, your withdrawal strategy is an important part of managing your portfolio for the long term.

An undesirable scenario is that you retire into a weak market environment and withdraw from a portfolio that’s simultaneously declining. Spending down in a down market can leave less of your portfolio in place to recover once the market does. This may lower the probability that your portfolio will last as long as you need it to.

One way to bypass that danger is to maintain a flexible withdrawal rate. For example, suppose you plan to withdraw 5% of your portfolio each year. In a downturn, you may temporarily lower that rate by half to one percent while relying more on other sources of retirement income (pension, Social Security, etc.) and/or reducing your expenses. As market conditions improve, you can then raise your withdrawal amounts.

By taking modest withdrawals, less than your expected amount, if possible, in those beginning weak years, you can help preserve some of your balance. It also puts you in position to possibly spend more during those strong years.

So, yes, we can expect a recession… someday. Just as we can expect periods of economic growth. When the next recession occurs could be a year from now or 10 years.

The best way to prepare for a recession is to make sure in advance that your portfolio is aligned with your personal goals and designed to be balanced enough to benefit from periods of growth before it happens, while resilient during those inevitable periods of volatility.

For a more comprehensive overview of preparing for a recession, be sure to download our guide: Protecting Your Money Against a Recession 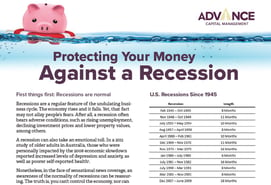