Getting Rid of Debt Before Retiring from AT&T 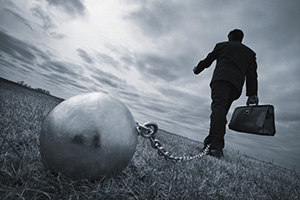 Retirement is about using your accumulated wealth to live comfortably on your own terms. At least, this is how retirement is supposed to work. Unfortunately, many people find their financial futures hindered by debt. Retiring from AT&T is a great accomplishment, one you don’t want clouded by owing your money or time to someone else.

A Transamerica Center for Retirement Studies found that an alarming 40% of retirees cite “paying off debt” as a current financial priority, including credit cards, mortgage and other consumer debt.

Essentially, using debt to make purchases is borrowing from your future self with interest. Therefore, you should retire as much debt as possible before you retire from AT&T. If you don’t, you could face the hard reality of having to pay off things from your past instead of finally living the dreams you’ve always had for your future.

Here are tips for managing debt as you near life after AT&T.

Make paying down debt a priority

You should make “eliminating debt” one of your top financial goals not only to free up income, but also because it puts you in a stronger financial position should things not go as planned.

You could face a significant income shortfall should you retire much earlier than planned. Remember, in most cases the IRS restricts you from taking penalty-free withdrawals from your retirement accounts until age 59 ½ and the earliest you can file for Social Security is age 62. You don’t want debt leading to a potential financial hardship.

Methods for paying off debt before retirement

Start tackling debt by separating the good from the bad. High-interest, revolving debt like credit cards is considered bad; whereas, low, fixed-rate debt like your mortgage and auto loans is considered good. Although the goal is to eliminate all forms of debt, whether good or bad, you want to firstly get rid of bad debt, which charges you more in rates and fees.

You can either start with your lowest balance and work your way up (snowball method) or pay off the account charging the highest interest rate and then work your way down (avalanche method). Choose whichever method you’re most likely to stick with to the end. To help reach your debt-free goal faster, call your credit card issuers to negotiate lower rates or have fees waived.

One particular type of debt plaguing older adults is student loan debt, as many parents and grandparents co-sign or take out loans to help pay for a child or grandchild’s education. Taking on student debt later in life is an easy way to squander much needed money from your own retirement. And, if you default on a federal student loan, your Social Security benefit could be garnished.

Whether you are debt-free or not, by the time you retire from AT&T it’s important to have built an emergency fund (three to six months’ worth of expenses) and/or substantial amount of cash savings. Retirement can last decades, and during that time you’ll likely face some major expenses, such as medical care, home repairs and a new vehicle or two. The cash will keep you from having to take an excessive amount from your invested savings or resort to using debt.