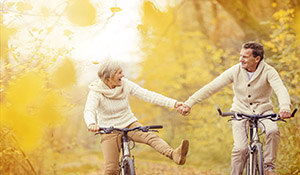 Retirement planning is all about numbers. It centers around one question: do my financial assets – pension, 401(k)s/IRAs, Social Security, property, sale of a business, etc. – provide enough income to fund my desired retirement lifestyle? At least, that is what most people think.

But ask any retiree, and they will likely tell you that it is only half the story.

Life satisfaction tops out at an annual salary of $95,000, on average, according to a study by psychologists from Purdue University. Enough money to never have to worry about going broke or paying for medical care is important. But money is not the only or most important piece of a fulfilling retirement.

Once you have a retirement plan in place, it is essential to focus on all those things money cannot buy. Here are seven non-financial assets that studies show can improve life satisfaction in retirement.

What good is money if you cannot enjoy it? The majority of retirees say that good health is the most important ingredient for a happy retirement, according to a Merrill Lynch/Age Wave report. Studies have proven that exercise and a healthy diet can reduce the risk of developing certain health conditions, increase energy levels, boost your immune system, and improve your mood.

Research shows even those who become physically active and adopt a healthy diet late in life dramatically lower the risk of cardiovascular illnesses and have a lower death rate than their peers.

The Centers for Disease Control and Prevention recommends about 150 to 300 minutes of moderate-intensity physical activity a week.

Hobbies and activities with people we like can boost life satisfaction, especially when our social networks shrink after leaving the workforce. Happier retirees were found to be those with more social interactions, according to one Gallup poll.

Further, social isolation has been linked to higher rates of heart disease and stroke, increased risk of dementia, and greater incidence of depression and anxiety. A low level of social interaction is just as unhealthy as smoking, obesity, alcohol abuse and physical inactivity.

The notion of retirement as time spent golfing, strolling along the beach or reading classic novels is outdated. While fun, the stereotypical leisure activities associated with retirement don’t provide a sense of purpose or meaning, which is what many retirees say is important.

One place retirees find a sense of purpose is work. In a Gallup poll, nearly 3 in 4 Americans said they plan to work beyond traditional retirement age, with the majority planning to do so because they “want to,” not because they “have to.”

Retirees also gain meaningfulness and other benefits from volunteering. The same Age Wave/Merrill Lynch study referenced above found that retirees were three times more likely to say “helping people in need” brings them happiness in retirement than “spending money on themselves.” Further, those who donated money or volunteered felt a stronger sense of purpose and self-esteem and were happier and healthier.

Experts believe that ongoing education and learning new things may help keep you mentally sharp simply by getting you in the habit of staying mentally active. Exercising your brain may help prevent cognitive decline and reduce the risk of dementia.

“Challenging your brain with mental exercise is believed to activate processes that help maintain individual brain cells and stimulate communication among them,” according to Harvard Medical School’s Healthbeat newsletter. Consider taking a class from a senior center or community college, learning to play an instrument or making it a habit to regularly visit the library and pick up a new book.

A half-glass full attitude may pay huge dividends, including lower risk of developing cardiovascular disease and other chronic ailments and a longer life. In an article published in JAMA Network, researchers found that study participants who rated highly in optimism were much less likely to suffer from heart attacks or other cardiovascular events and had a lower mortality rate than pessimistic participants.

Another research article, published in PNAS, indicates that people with higher levels of optimism lived longer. Optimistic women had a 50% greater chance and optimistic men a 70% greater chance of surviving to age 85.

Studies by psychologists Robert Emmons and Michael McCullough show that people who counted their blessings had a more positive outlook on life, exercised more, reported fewer symptoms of illness and were more likely to help others.  This is further supported in work by psychologist Nathaniel Lambert that finds stronger feelings of gratitude are associated with lower materialism. Gratitude enhances people’s satisfaction with life while reducing their desire to buy stuff.

Turns out Fido can provide more benefits to you than grabbing the newspaper. Older dog owners who walked their dogs at least once a day got 20 percent more physical activity than people without dogs and spent 30 fewer minutes a day being sedentary, on average, according to a study published in The Journal of Epidemiology and Community Health. Research has also indicated that dogs help soothe those suffering from cognitive decline, and the physical and mental health benefits of owning a dog can boost the longevity of the owner.

Retirement is major transition comprised of many financial as well as life decisions. This why it is important to work with a financial adviser to create a retirement plan as early as possible. That way you can spend more time focusing on everything else that equally matters.