7 Great Reasons for Retiring in the Midwest 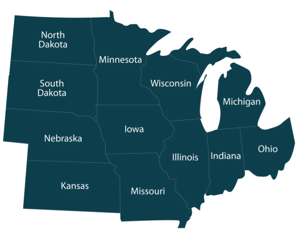 Age in place or relocate? It is one of the most important retirement decisions you’ll make. With a reputation for harsh winters, retiring in the Midwest may not be the first choice for many Americans.

But, you may want to reconsider.

We work with people from all over the country, but the Midwest is our home. Most of our clients are from here, and many have chosen to retire here. After all, it’s rich in natural beauty, history, vibrant cities and overall nice, friendly people. There is a lot of things to do, especially for retirees.

Of course, the best place to retire is personal. It depends on your financial goals and with whom you want to achieve them. Your decision will surely involve trade-offs. Do you want to live in an exclusive community near the beach? Or, would you rather keep your cost of living low so that you can travel more?

Whatever your personal preferences, we think you’ll find what you’re looking for in a retirement destination here. If you doubt that, check out these 7 great reasons why retiring in the Midwest deserves a closer look:

In a study by the National Institute on Retirement Security, cold states, including several in the Midwest, ranked more financially secure for retirees than those in the sunbelt. Midwest states, generally, offered more generous benefits, more working opportunities and better-funded services for older adults.

Many retirees are likely going to need the help. The average family has $95,776 in retirement savings, according to the Economic Policy Institute. Further, a survey by the Employee Benefit Research Institute found that nearly half of Americans have little or no confidence they will have enough money to live a comfortable retirement.

Fortunately, some states are taking measures to help older adults when the federal government is less able or willing to do so.

The most popular retirement aspiration for working-age people is spending more time with friends and family, according to a survey by the international bank HSBC. If you’re from the Midwest, then chances are you’ll consider staying here to remain close to your loved ones.

Maintaining close relationships with your family could have a major positive impact later in life. One study suggests that parents living with an adult child – who may have moved back home for economic reasons – are less likely to suffer from depression.

What if you have no ties to the Midwest though? You may be attracted to the safe and clean neighborhoods that are typically associated with family-friendly communities. And, several Midwest states are considered the best to raise a family in a recent study by the Annie E. Casey Foundation.

Chicago. Minneapolis. Ann Arbor. Madison. These are just some of the popular cities in the Midwest that offer much of what older adults are looking for in a place to retire: walkability and public transportation; nearby attractions and retirement activities; cultural opportunities, such as lectures and continuing education courses; and, most importantly, access to premier health facilities.

Contrary to popular opinion, several Midwest communities have seen a recent influx of older adults. For example, the 65+ population in metro Detroit grew by nearly 2% from 2007-2012 despite an overall loss of population. It trailed only Phoenix, Portland and Las Vegas metro areas as one of America’s fastest growing retirement places.

You can find everything in the Midwest, from sandy beaches and crystal clear lakes to rugged mountains and wild forests. It is home to the Great Lakes and the Black Hills. It boasts more than 60 national park sites.

Therefore, the Midwest offers a plethora of inspiring outdoor retirement activities, such as hiking, biking, fishing, swimming and camping. Pack your camper or car and take a Midwest road trip to see for yourself.

Despite its reputation as the Rust Belt, the Midwest’s unemployment rate is actually lower than the national average and better than several other regions, according to the latest data from the Bureau of Labor Statistics. In recent years, cities such as Detroit and St. Louis have attracted new business and investments. This bodes well for older adults who want to launch a second career or their own business, or who simply want to work during retirement.

Who wants to retire among a bunch of rude people?

It turns out that everything you’ve heard about Midwestern hospitality is true. People in the Midwest are more friendly. That’s according to a study on differences of regional personalities published in the Journal of Personality and Social Psychology.

Researchers analyzed the personality traits of 1.6 million Americans through Facebook, surveys and other methods. Friendly and conventional were the most common traits among people living in the Midwest compared to other areas of the Unites States.

7. The Health Benefits of Cold Weather

Of course, the biggest drawback of retiring in the Midwest is the winters. But, can the cold weather actually be good for you?

There are several potential health benefits. One study indicates cold weather could help burn calories. Brown fat, which exists normally in our bodies and eats other ordinary fat, is triggered when people get cold. A drop in temperature can also reduce inflammation in your body. Think of when you put an ice pack on an injury. Additionally, places that experience cold weather are less hospitable to disease-carrying insects such as mosquitos and ticks.

Cold weather may also improve your mental well-being. People have been shown to contact their closest friends and family and speak to them for longer when in isolating weather conditions. Further, 72 and sunny year-round sounds great, but it may not make you happy. It can actually have the opposite effect, as detailed in Psychology Today. Most people feel their spirits lift on warm days after suffering through a period of cooler, darker days.

While most people fret over when to retire, it is important not to overlook where to retire. It is a financial decision you should discuss with your financial adviser to determine what may work best for you. The choice is personal, but we can tell you the Midwest is nice. We welcome you with open arms.