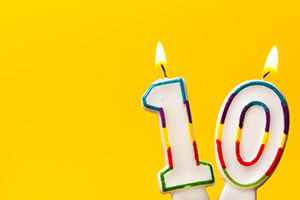 Take yourself back to March 6, 2009. Do you remember what you did that day? It was a Friday. Perhaps you followed a typical 9-to-5 routine: dropping the kids off at school, work, dinner at home, in bed by nine. Or, maybe on that particular night you went out for drinks to take some of the edge off. You’ve been watching the news and checking your 401(k). Things aren’t looking good. Just in the previous month, 650,000 jobs were eliminated. The S&P 500 lost more than 50% since its market high in October 2007.

Like most people around that time, amid the Great Recession, you were probably wondering: How much worse can it get? As if one couldn’t dread Mondays even more, the next one seemed to promise even more pain.

Fast forward 10 years to the day and we are experiencing one of the strongest and longest bull markets in history. March 9 marked the 10-year anniversary of the current bull market, with the S&P 500 up more than 300%.

We don’t know how long this bull market will last. As Yogi Berra is famous for saying, “It’s tough to make predictions, especially about the future.” But we do know what happened over the past decade, and in that lies valuable lessons to help carry investors forward to their financial goals.

When the S&P 500 dropped to 666 on March 6, 2009, there was no flashing signal that this was the bottom. Against the backdrop of one of the worst recessions of all time, it’s understandable why some investors decided to cash out or move all their money to cash assets.

Those who did, however, likely made a costly mistake, missing out on valuable gains from the subsequent rebound. Especially, those who hit the exits in March 2009 and never returned or got back in late.

For most investors, market timing is a losing game. It’s extremely difficult to know when to get out and when to get back in. Once that is known, it’s usually too late.

Things are obvious only in hindsight

We all know no one can accurately predict the future. And, we’ve all heard the phrase: hindsight is 20/20.

With that said, it only seems obvious to everyone now how and why trouble struck from 2007 to 2009. However, very few people back then were raising the alarm. Recessions and bear markets usually take people by surprise.

One day this bull market too will end. But who can accurately say what will trigger the next market downturn? That argues for exercising some caution when investing. The accompanying lesson here is that markets rise and fall, and no investment performs well forever. It’s important to build – and keep – a broadly diversified portfolio that includes stocks, bonds, cash and other assets to help limit your exposure during a market downturn, yet capture returns from assets that do perform well during that time.

The market goes up more than it goes down

As painful as the Great Recession was (and many people are still dealing with the aftermath), the market has proven rather resilient. Although the longevity and strength of this bull market makes it an exception, it is still an example of an historical stock market trend. The stock market, historically, has always made a full recovery.

The fact is the stock market has gone up much more often than it has gone done. Consider that the last bear market, from October 9, 2007 through March 9, 2009, lasted 17 months. And, here we are in year 10 of the following bull market. This emphasizes the importance of sticking with your investment plan in both good times and bad.

The long-term looks smooth, but the short term is rocky

Still, the 300% gain in the bull market isn’t a straight line, though it may appear that way. The stock market can be volatile during short periods of time. Look no further than the turbulent fourth quarter of 2018, which saw the S&P 500 drop by 13.5%. That is close to the average market drop of 13.9% that has happened in any given year over the past 39 years. Therefore, short-term market volatility is something you should expect.

You’re better off focusing on what you can control

The fact is you can’t control the market. Instead, you should focus your efforts on what you can control. As an investor, you should concentrate on your financial goals, asset allocation, investment costs, contributions and withdrawals, all of which you can control. Set reasonable financial goals, choose an asset allocation you’re comfortable with for the long-term, take a low-cost approach, keep saving and don’t overspend.

If you do all those things appropriately, the results tend to take care of themselves. Heck, you can practically guarantee better returns than the next investor by keeping your costs lower. Ultimately, if you are reaching your financial goals, don’t waste time worrying about the market.

Mark Twain is famous for having said: “The rumors of my death have been greatly exaggerated.” The same could be said of this bull market. Ever since it started there has been a parade of news stories declaring its demise. Yet, it runs along. And, it could continue as long as economic growth, corporate earnings and employment remain strong.

The point is, you can’t believe everything you hear, read or see in the news. Which is why headlines should never factor into your investment decisions.

Go back to March 2009. Stories about the 8.7% unemployment rate and tanking home prices dominated the nightly news. Such negative headlines likely convinced many investors to exit the market, right as it was about to turn around. That isn’t to say you shouldn’t be informed. Just don’t let one news bit influence you and make sure you get the full picture before you consider making changes to your investment plan.